A 12 square metre anti-Brexit artwork has been installed across the windows of Arlington House, Margate, within the Isle of Thanet. It is visible by locals and visitors to the coastal town – particularly from Margate train station over 100 metres away. Some locals have already started re-naming Arlington House, calling it “Block Brexit Tower”. (Please credit Joel Knight when using any photograph.) 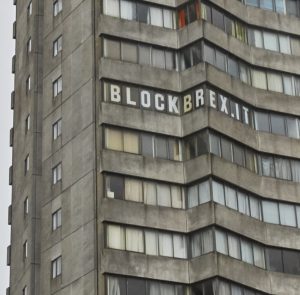 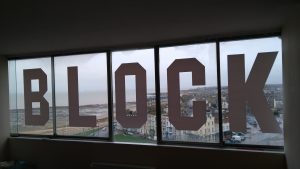 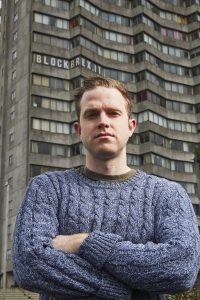 Rob Yates, 31, installed BLOCKBREX.IT on the windows of his own flat in Arlington House. The freehold of Arlington House is owned by Thanet District Council. UKIP won control of the council in the 2015 elections and UKIP councillor Chris Wells is still leader of the council.

Rob is supporting the physical artwork with Twitter-based art on the same theme at https://twitter.com/BLOCKBREX_IT.

Q: Why have you installed the art work?

“I installed BLOCKBREX.IT because although the majority of voters voted for a Brexit journey, they never voted on the destination. The Brexit conversation is far from over and I feel that displaying this anti-Brexit artwork proudly in UKIP territory will maintain that conversation,” said Rob Yates.

“The level of debate on Brexit during the referendum was brutal. Brexit will be brutal. Arlington House is an example of brutalist architecture. Hence the brutalist lettering used in the BLOCKBREX.IT installation is a necessary response to the brutality of Brexit,” said Rob Yates.

Q: What do you think of Brexit?

“Brexit is brutal. It has caused a generational divide between young and old across the country and unless people are given a second voice the brutal wounds of Brexit won’t heal. David Cameron dropped a brutal fart in Britain’s lift when he called a referendum and then simply walked away. No-one is truly happy with the Brexit process, no-one knows what will happen next, and no-one will be truly happy with the Brexit outcome,” said Rob Yates.

Q: What is the public’s reaction to the art work?

“Most people have been extremely positive. Some people are even calling Arlington House “The Block Brexit Tower”. Margate is a vibrant creative town and many people see BLOCKBREX.IT as a natural extension to the art and creativity that’s so alive right now. People are engaging with the @BlockBrex_it Twitter profile and the digital artwork that’s there, as well as putting photos on Instagram, and there’s a vibrant exchange on Margate Creatives’ Facebook Group. Mostly the young are enjoying and feel positively towards BLOCKBREX.IT. Of course, it’s them that really embrace the benefits of the European project – the manner in which it has brought people of different cultures together rather than fighting brutal wars,” said Rob Yates.

Q: How have your neighbours reacted?

“Many of my neighbours in the building have posted compliments through my letterbox, and have asked to have a BLOCKBREX.IT statement placed on their own windows. However, one neighbour ripped off my letterbox whilst I was in the flat and then offered it back to me. Rather than reporting this incident to the police as a brutal act of criminal damage I like to think he just thought I needed a bigger letterbox for all the compliments and supportive letters I’m receiving from local people who are against Brexit,” said Rob Yates.

Q: How have the property owners reacted?

“The managers of the property have ordered me to take down my decorative artwork. I do not understand the basis for their objection,” said Rob Yates.

Q: What do you think of Boris Johnson’s Valentine’s Day Speech? Shouldn’t Remainers get behind Brexit?

“Boris Johnson’s Valentine’s Day speech was just another attempt to drum up support for his own leadership bid. He has committed irreparable damage to his own reputation. Young people will never forgive his brutal betrayal of the country for personal ambition. He offered no concrete solutions to the Irish border or the Dover customs checks. He offered more brutal criticism of the millions of British people that want to remain within the EU.

“At least he admitted that after Brexit most of the UK’s trade will still be with the EU, but that we will have to comply with EU directives without having a say in them. So at least he understands the situation.

“If the UK was heading towards a softer Brexit, allowing our businesses to relax and giving comfort to the EU workers in our NHS, he might get more support. Instead, businesses are spending time and money making contingency plans and nurses originally from the EU are leaving the NHS,” said Rob Yates. 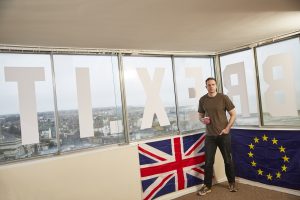 For further editorial information, interviews with Rob Yates, additional images or anything else please contact brian@pwkpr.com or call 07904414889.